Whether you’re a cryptocurrency afficionado or not, you’re likely to have heard the word ‘Bitcoin’ thrown around in the office, amongst friends and in the news.

Bitcoin was introduced in 2009 and is the world’s largest cryptocurrency by market capitalisation. Unlike fiat currency, Bitcoin is created, distributed, traded, and stored with the use of a decentralised ledger system, known as a blockchain.

Since it’s inception, Bitcoin has gone from strength-to-strength as 1 Bitcoin was worth over £40,000 in January 2021.

However, in May 2021, the price of Bitcoin fell below $34,000 for the first time in three months, as China imposed fresh curbs on crypto currencies and Elon Musk backtracked on his previous announcement.

Since 2019, it has been illegal to trade cryptocurrency in China in effort to reduce money-laundering.

Despite this, Chinese nationals can still trade cryptocurrencies online, which has concerned Beijing authorities for a long time.

These concerns are not unfounded.

Despite being illegal to trade Bitcoin in China, around 65% of Bitcoin mining is carried out in the country, due to its cheap electricity.

But why is Bitcoin mining bad for the environment?

Bitcoin mining requires a specialised computer to authorise transactions within the blockchain by solving complex mathematical problems, and mining must be carried out 24/7 to be effective, which uses a lot of energy.

To improve the profitability of mining, many people have set up ‘mining farms’ in which they use multiple computers at the same time, which consumes even more energy.

The Cambridge Centre for Alternative Finance estimated that Bitcoin mining uses the equivalent of 100 Terawatt Hours per year – the same amount of energy consumed by small countries such as Malaysia or Sweden. 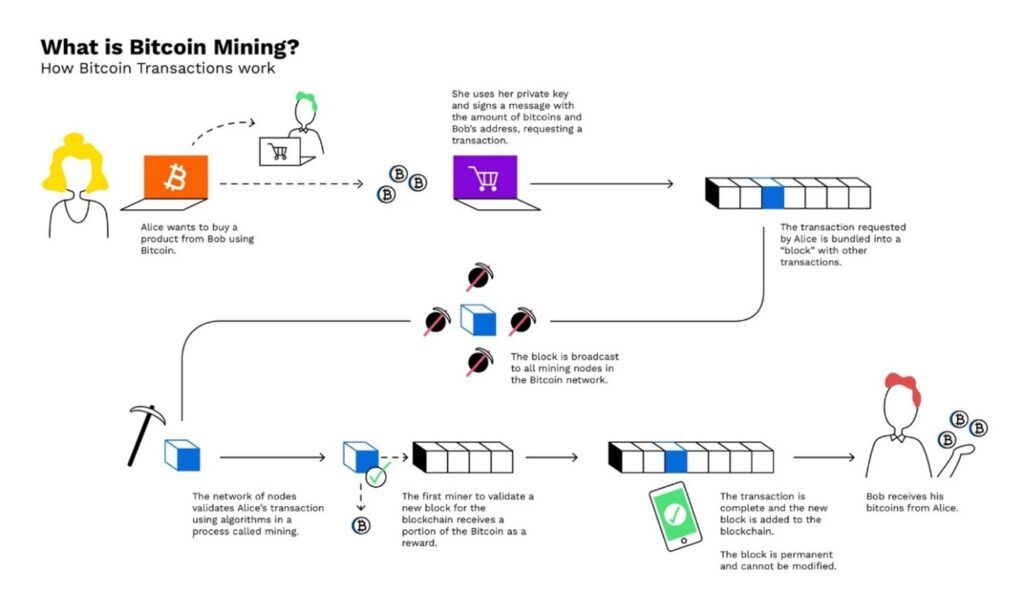 In 2021, China’s Inner Mongolia region proposed punishments for companies and individuals involved in digital currency mining as it looks to crackdown further on the practice.

Following its failure to meet Beijing’s energy use targets in 2019, the Chinese government has subsequently laid out plans to cut down on energy consumption in that area.

When it was first introduced, many believed Bitcoin to be the ‘currency of the future’, but due to its volatile pricing and not so eco-friendly nature, the future of Bitcoin and the cryptocurrency market has a grey cloud hovering over its head.

The benefits of a decentralised currency are plentiful, such as protecting customers from bank failures/collapses, putting a stop to expensive bank fees and policies, in addition to facilitating seamless and cheap international payments.

However, at a time where the world is trying to become ‘greener’, do these advantages outweigh the damage an industry such as Bitcoin causes the environment?

The answer is likely not.

Norway is the latest country to attempt to make Bitcoin ‘greener’.

Seetee’s goal is to establish mining operations that consume overproduced electricity from renewable energy farms during periods of low demand.

This setup would provide the Bitcoin mining centre with low-cost, zero-carbon power and renewable energy farms with a reliable customer.

However, for Bitcoin mining to be most effective, rigs must run 24/7.

Seetee’s approach would mean that when clean electricity is needed for more socially-beneficial purposes, mining must stop – and if mining isn’t 100% effective, is it worth using overproduced electricity on, rather than storing and distributing elsewhere?

The Future of Bitcoin?

Despite its merits, Bitcoin and other cryptocurrencies still have a long way to go until mainstream adoption.

With a high environmental impact, it’s likely Bitcoin will continue to dwindle until a cleaner method to mine and approve transactions is found.

At Sinoscan, we are excited to see where the future of Bitcoin and cryptocurrency is headed and how the application of this technology will be used in the years to come.

We use cookies to give you the best experience. By using our site you accept the use of cookies.